Convenient for Travel via 3 Airports

Port of Kobe: Connected to a Global Cargo Transportation Network

The Port of Kobe is one of the world’s leading ports and is connected by sea route to other main ports around the world, thus enabling easy mass liner transportation, and is proud of its optimal location as a distribution base.
The Port handles regular services for more than 500 ports in over 130 countries and regions that include NorthAmerica，Europe, Central and South America, Oceania, Southeast Asia, and China. It basically connects Japan to the rest of the world in the minimum amount of time. 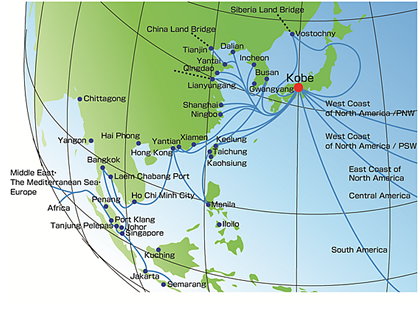 The port of Kobe is the westernmost port of Japan‘s  5 biggest ports （Tokyo，Yokohama, Nagoya, Osaka, and Kobe）.
Kobe is therefore often used as the last port for exporting and the first port for importing Asian services. Kobe actually provides the shortest transit time to other Asian countries. A number of services are available throughout Asia.